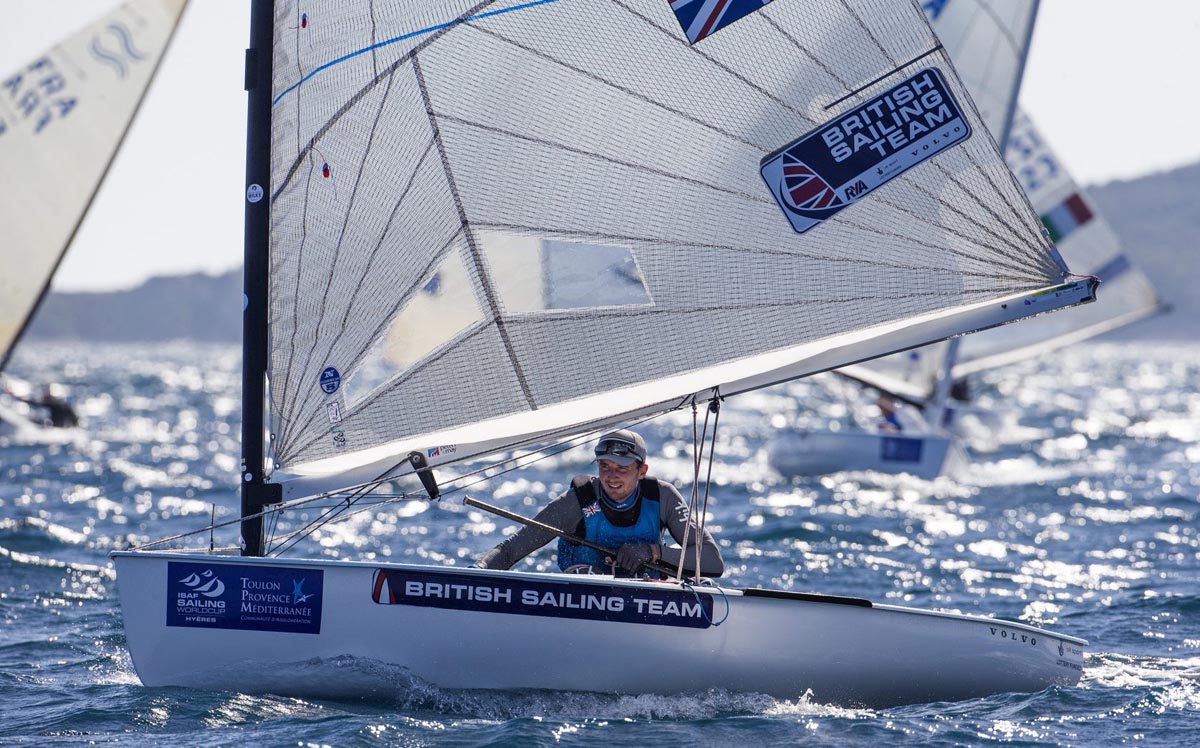 Giles Scott (GBR) has taken pole position in the Finn fleet at the ISAF Sailing World Cup Hyeres after a day of tough sailing in winds around 16-18 knots. He leads from Ed Wright (GBR) and Pieter-Jan Postma (NED).

After another delay to wait for the wind, the Finn fleet eventually got in two slightly late races. The wind was forecast to come in stronger than on Wednesday and did just that. Race 3 started in stronger wind, which completely changed the leaderboard from the day before.

Tapio Nikko (FIN) led Caleb Paine (USA) round the top mark from the right ahead of Vasilij Zbogar (SLO) and Giles Scott (GBR). Ed Wright (GBR) rounded in fifth and moved into the lead on the first downwind. He maintained his lead on the second upwind while Ivan Kljakovic Gaspic (CRO) moved up to third. However on the final downwind Tapio Nirkko (FIN) moved ahead for the win from Wright and Kljakovic Gaspic.

Most of the favourites were up the front, however it was a disaster for overnight leader Andrew Murdoch (NZL), who suffered sail damage, and was unable to finish the race.

The wind had increased by race 4 and the majority favoured the right again on the first beat. At the first mark it was Paine followed by Pieter-Jan Postman (NED) and Zbogar. Scott rounded in fifth but quickly moved up to second downwind to round the gate behind Zbogar. On the second upwind, Postma and Scott stuck together and Postma just squeezed round the next mark ahead. Björn Allansson (SWE) led the chasing pack in third after making gains on the right. The dual at the front continued downwind with a big gap to the rest of the fleet. Never more than three of four boat lengths between them they battled downwind. Scott made his move with less than 500 metres to the finish as he eased past the Dutchman. Zbogar made some gains right at the end to snatch third place.

A fifth and first moves Scott to the top of the scorecard, while a second and fifth also moves up Wright to second. Wright said, “We had an upgrade in conditions over night. Great hiking conditions and downwinds but there were still some big holes in the wind to keep it interesting. I had two average starts but came through with some good speed upwind rounding top five in each race. The downwind of the first race was magical as I managed to gybe and get clear of the sails and just pulled away with some good speed, which is good as I have been working hard on technique and changing styles recently. Overall a fun day.”

Nirrko followed the race win with a sixth to move up to tenth overall. “In first race I didn't start so good but managed to get clear lanes until all the way up in good pressure so managed to round first. Ed passed me on the first downwind and we came to the second top mark in same order. On the last downwind I got good groove on and passed Ed to get the bullet.”

“In the second race it was a tricky first upwind after a poor start. Yet I had good speed around the course, which helped me to climb couple of places to finishing sixth. Good day all in all after yesterday's disaster.”

Another big climber was Björn Allansson, now is sixth. “It was full power sailing today. Good Fun. In the first race I didn't have a perfect start but fought my way back in the first lap. In the second race I had a good start and after that it was a lot easier.”

Overall leader Scott said, “The breeze came in and it was a lot steadier today but it certainly wasn’t straightforward. It was a bit of a hike-off really. It was a very physical day and pretty exhausting, but very good to come away with a five and a one and to just sneak by and get PJ was a good way to end it.”

The opening series is now at its half way stage and will conclude on Saturday, with the medal race following on Sunday. A lot of those in the top 10 already have a high score lurking, so there is still a long way to go for everyone.