Scott and Wright extend on tricky day three in Hyeres 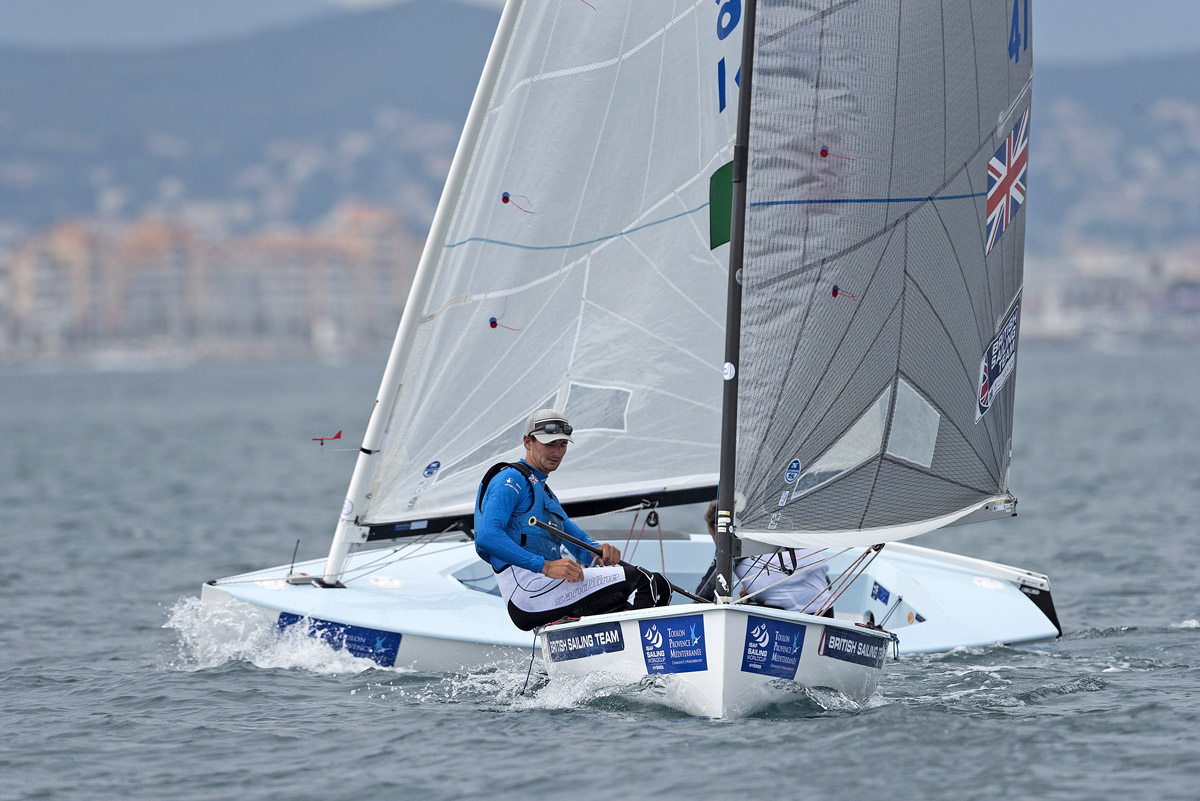 Giles Scott (GBR) has extended his lead over Ed Wright (GBR) and Ivan Kljakovic Gaspic (CRO), after the third day of the opening series at the Sailing World Cup Hyeres was again delayed by light winds early in the day. Race wins went to Caleb Paine (USA) and Ioannis Mitakis (GRE).

It was another long wait for the Finn fleet as the day dawned windless, and when racing did finally get underway there were a lot of new faces pushing the front. It was a tough day again for some. Both races started in good breeze which then died and shifted.

In race 5 Stig Steinfurth (DEN) was the early pacesetter, until Caleb Paine (USA) came past to take the win. Milan Vujasinovic (CRO) gradually moved up from tenth round the first mark to third at the finish.

Then Ioannis Mitakis (GRE) won race 6 from Ivan Kljakovic Gaspic (CRO) and Jonathan Lobert (FRA) after leading from start to finish. In fact it was a slightly processional race with very few place changes. Then on the last run after the top 12 had finished the wind died and shifted so much that some had to finish upwind.

Regatta leader Giles Scott (GBR) rounded the top mark fourth and finished fourth. But he managed to extend his lead at the top to 14 points after placing eighth in the first race of the day. Second overall Ed Wright picked up a tenth and 13th to move 18 points clear of third, while a 15th and second was enough for Kljakovic Gaspic to jump from tenth to third overall.

Paine said on the first race, “I had a great start and worked my way over to the right side. I had some great pressure over there and connected with it. I had legs from there and it was pretty easy after that. You have to look for the small opportunity that's there and sort of look around at the race course and judge what may happen later on in the race. It's like predicting the future and only when you get it right you get a result like that.”

"There are a lot of great guys especially when it's really compact and with only 40 boats it's really tight competition. I like it and I like the format and I'm looking forward to seeing how it continues."

Vujasinovic said, “Today was a very tricky day. I had very good starts but both races missed out on some major shifts in first upwind. So both races i was trying to catch up which mostly worked well.”

Kljakovic Gaspic explained the second race, “In the second race I made a great start and sailed clear all the race so it was easy. I wish I was doing the same for past two days as well but it is funny that sailing sometimes gets so complicated.”

Scott said, “It was tricky again racing in southerly, then in the second race it died on the last run and went south-westerly. Fortunately I don't think there was too many place changes. It was good to get the two race in just in time for the wind.”

The winner of the second race, Mitakis described his day, “We had tricky conditions in both races. the start was obviously on the pin and needed an immediate tack to go fully right where there seemed to be more pressure. In both races I had a really good start and tacked immediately. In the second I did the right thing to go fully right. I had a close rounding with Bambi but in the second upwind i manage to extend so then it was a bit easier.”

Saturday will be the final day of the opening series. It has been a really high scoring series so far for most of the sailors. None of them have got it right every race, and most have at least one high score that they'd like to keep as their discard. There are just two more races to go until the medal race.