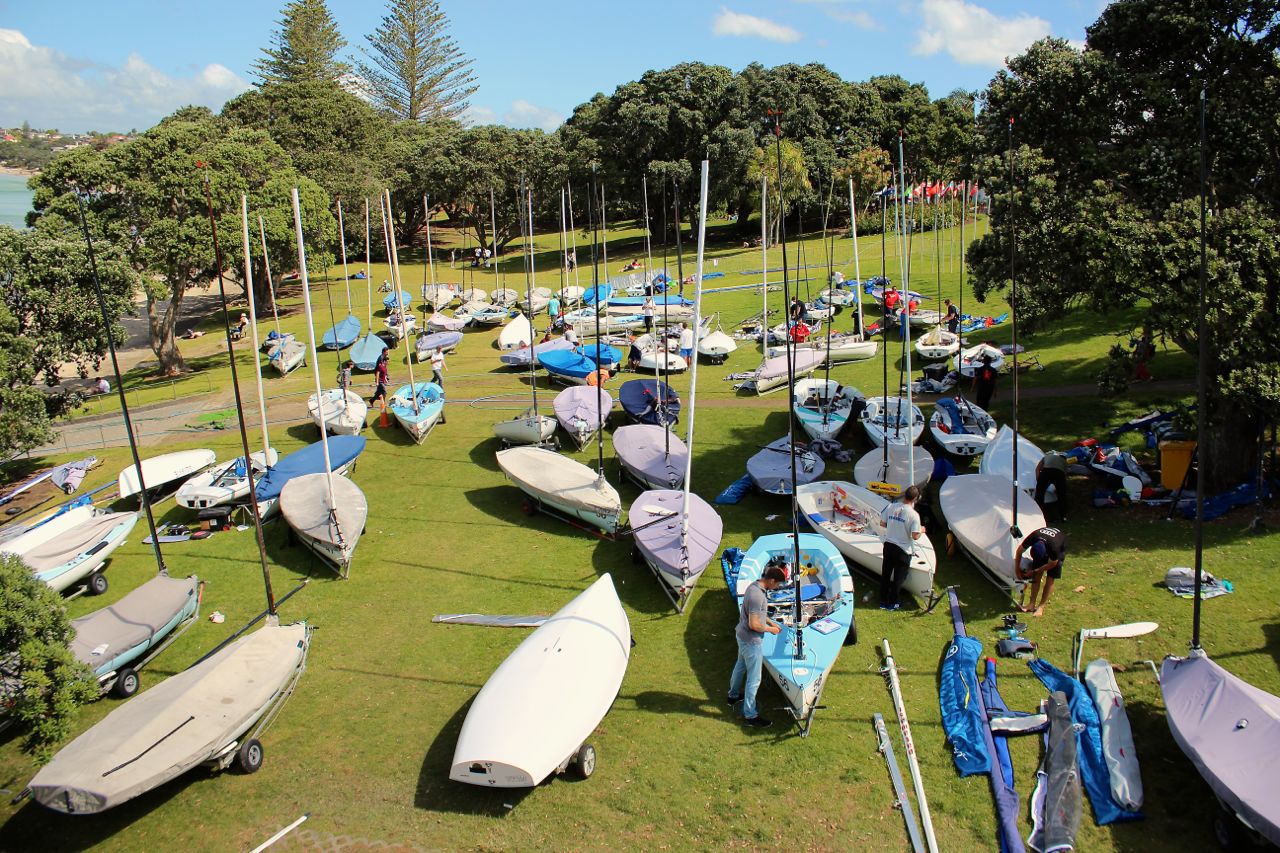 The waiting is almost over. The anticipation is intense. The competition will be tough. The sailors are ready. The 2015 Finn Gold Cup gets under way Monday with the practice race before a series of 10 fleet races decided who goes through to next Sunday's medal race.

The fleet consists of many old and new faces, plus a strong local fleet making the best of the opportunity to rub shoulders and gunwales with some of the best sailors in the world. Between them the fleet can count 19 world titles, European titles or Olympic medals. It is going to be a titanic struggle between the titans of the sailing world.

There will be several battles going on next week. The principal battle will be to claim the world title, but for many the goal is simply to qualify their nation for the Rio 2016 Olympics. As the second Olympic qualifier, there are a minimum of four places on the start line in Rio to be won this week. To add further interest, the selection trials between several of the nations qualified and no yet qualified is also ongoing, so this event will be a key indicator of form going into Olympic year. No quarter will be expected and none given. For many it will be a head to head fight for glory.

The 14 nations that have already qualified for a place on the starting line in Rio next August are: BRA, GBR, CRO, FRA, NZL, USA, NOR, SWE, DEN, SLO, AUS, HUN, FIN, CHN. With 28 nations taking part this week, there will be 14 nations vying for just four places. The remaining regional qualifiers are at Melbourne, Miami and Palma and if no sailors qualify at those then the places will be awarded based on this Finn Gold Cup.

From Sweden, Björn Allansson (SWE) and Max Salminen (SWE) are going head to head to win a place in Rio. Salminen did the test event and on paper had better results last year. Allansson is a former World No 1 who will be fighting all the way.

The Russian battle could prove very interesting. Egor Terpigorev (RUS) was sent to the test event, though junior Arkadiy Kistanov (RUS) has posted some great results, including an outstanding fifth place at the 2015 Europeans. Terpigorev is a bigger sailor and generally gets the upper hand in strong conditions. Add into that mix the return of Oleksiy Borysov (RUS), who sailed for Ukraine in London 2012 and now sails for Russia, and took the recent Russian Championships in Sochi. Russia is also still trying to qualify as a nation for Rio.

Caleb Paine (USA) has been the dominant American since the 2012 Olympics when the 2008 silver medalist Zach Railey (USA) stopped sailing. Railey has been training and is making his comeback in Takapuna. Whether it's too late in the day to steel the Rio spot from Paine is yet to be seen. Paine qualified USA for Rio with an excellent seventh place at the 2014 Finn Gold Cup in Santander. Railey has not outwardly committed himself to an Olympic campaign so a lot may depend on his performance this week.

Jake Lilley (AUS) has only been in the class just under two years but, although still a junior, he is making his mark at the top with a steady series of good results. He was sent to Rio for the test, after qualifying Australia in Santander, but former World No 1 Oliver Tweddell (AUS) is ready and able to take the place in 2016, so this should produce a good battle next week.

Michele Paoletti (ITA) is undoubtedly the top Italian at the moment, winning the huge 90 boat fleet at Malcesine a few weeks ago. If he qualified, and Italy still has to qualify the nation spot for Rio, he could be one of the oldest sailors there. Despite going into Santander as World No 1 last year he only finished in 20th place, some way below the cut.

New Zealand has two of the best Finn sailors in the world at the moment in Josh Junior (NZL) and Andrew Murdoch (NZL). Both have placed highly in international regattas, with Murdoch taking the bronze at the 2013 Europeans and Junior the silver at the 2015 Europeans. They have very different styles with Murdoch more conservative and tactical and Junior often following his nose. But both styles work and they should both place highly this week.

From Croatia, Ivan Kljakovic Gaspic (CRO) is the three times and current European Champion who placed second in last year's Gold Cup. Surely one of the favourites to medal this week, his main home opposition is the talented Milan Vujanisovic (CRO), who can never be discounted and is capable of causing an upset.

Pieter-Jan Postma (NED) qualified himself at the Rio test event but still has to qualify his country next week. After finishing a lowly 26th in Santander, he came back, as he often does, stronger and more focussed than ever before. His priority goal this week has to be to finish in that group of four and based on recent performance that should be safe money.

The Spanish battle should be interesting. Alex Muscat (ESP) was the best in 2014, but Pablo Guitian Sarria (ESP) is also making his mark, winning the medal race at the Abu Dhabi world cup final a few weeks back to take the bronze medal. Rafa Trujillo (ESP), the 2007 World Champion and 2004 Olympic silver medalist, is also entered but we are not sure if he is going to be sailing yet.

Several nations who have already qualified for Rio have only one top sailor competing tin Takapuna, so this week is all about the world title. Jonathan Lobert (FRA) is the French favourite, and the bronze medalist from London 2012, who had his task made much easier with the withdrawal from the class of Thomas Le Breton (FRA), his long time training partner who took a great opportunity to sail bigger boats.

Vasilij Zbogar (SLO) won the 2013 Europeans and is looking for his third Olympic medal after winning bronze and a silver in the Laser class in 2004 and 2008. He is arguably one of the most professional sailors on the circuit and as he soon becomes the wrong side of 40 says this is his last Olympics. He picked up a bronze at the Europeans in May and also won the high stakes SWC Final in Abu Dhabi last year. Falling from his bike in the summer, his training programme took a dive with several broken ribs. So this week will be a good indication whether he has fully recovered and caught up the lost time.

It's also worth looking out for Alejandro Foglia (URU). Hoping to sail his fourth Olympics in Rio, his best results was an eighth at London 2012 in the Laser class. He has been dogged by injury over the last few years, but on his day, and by the numbers, he should be a clear contender to win a place in Rio.

After winning the Junior World Championship in 2014, Anders Pedersen (NOR) followed it up with a magnificent eighth place in Santander to take Norway to the Olympics. Growing stronger and faster all the time, he might be young, but can challenge the best.

Tapio Nirkko (FIN) has been the dominant Finn sailor from Finland for as long as anyone can remember, having already competed in two Olympics. His bronze medal at the Rio text event was his best result to date and he says he is sailing as well as he ever has. It is good to see some other Fins racing in Takapuna, but Nirkko should figure highly at the end of the week.

Other names who could figure next week include London 2012 Olympians Alican Kaymar (TUR), Deniss Karpak (EST) and Piotr Kula (POL), and the 2013 world champion Jorge Zarif (BRA). Zarif won a light wind Finn Gold Cup in 2013 and has not repeated that form since, However he is still young and a lot of host nation hopes rest with him in 2016. Zsombor Berecz (HUN) is also likely to challenge the top 10

With the long term forecast showing light winds for most of the week, Ioannis Mitakis (GRE) may be in his element. He won the 2012 Europeans in very light winds, and placed 20th at the Europeans this year in a mix of conditions.

Jonas Høgh-Christensen (DEN) is a the double world champion and 2012 Olympic silver medalist. One of the most talented sailors in the fleet he just can't seem to give it up, and is now heading for his fourth Olympics, having stopped sailing after both the 2008 and 2012 Games.

As said last week, on paper, Giles Scott has to be the favourite. He is in a new boat which should prove interesting, and has been unbeaten for more than two years which is a good record to try and maintain going into the Olympic year. He has already been selected to go to Rio, so his sole focus is on the world title. The 2010 World Champion Ed Wright (GBR) can never be ruled out while Ben Cornish (GBR) is also starting to put together some good results.