The August 2011 issue of the International Finn Association's magazine FINNFARE. 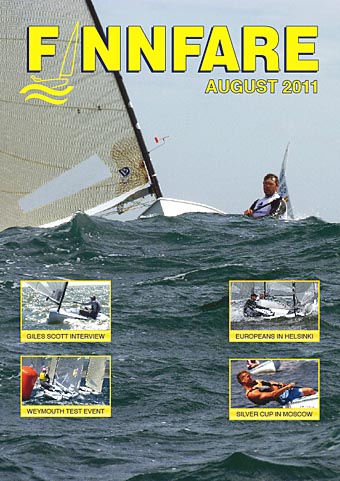 It is available in print and online versions. Contents include:

Giles Scott interview - A look at the new European champion and his thoughts going forward.

Masters - 282 boats travelled to Punta Ala in Italy for the biggest Finn event of all time. Michael Maier dominate on the water to take his third title. Also Fons van Gent updates on changes within the Masters as well as on future events.

IFA AGM and Accounts - All the details from the Annual General Meeting, with full reports from all the officers and the 2010 accounts

News - From Austria, Finland, Germany, Italy, The Netherlands, Sweden, and Switzerland plus lots of trivia, views and great photograpghs.

The August 2011 issue of FINNFARE was published on August 31.

The cover photo is Daniel Birgmark of Sweden sailing at Weymouth during the Olympic Test Event.

This issue can be downloaded through the classs website or viewed online here: http://issuu.com/finn-class/docs/finnfare-august2011