Olympic hopefuls, past, present and future, feature in April 2016 edition of FINNFARE

Josh Junior, featured on the cover of the April 2016 edition of FINNFARE, is fast becoming the most successful New Zealand Finn sailor of the last generation and one of the brightest talents in the class at the moment. After a string of top results this season, including his first ever major European regatta win at the Princesa Sofia in Palma he is still hoping for selection to go to his first Olympics in Rio. 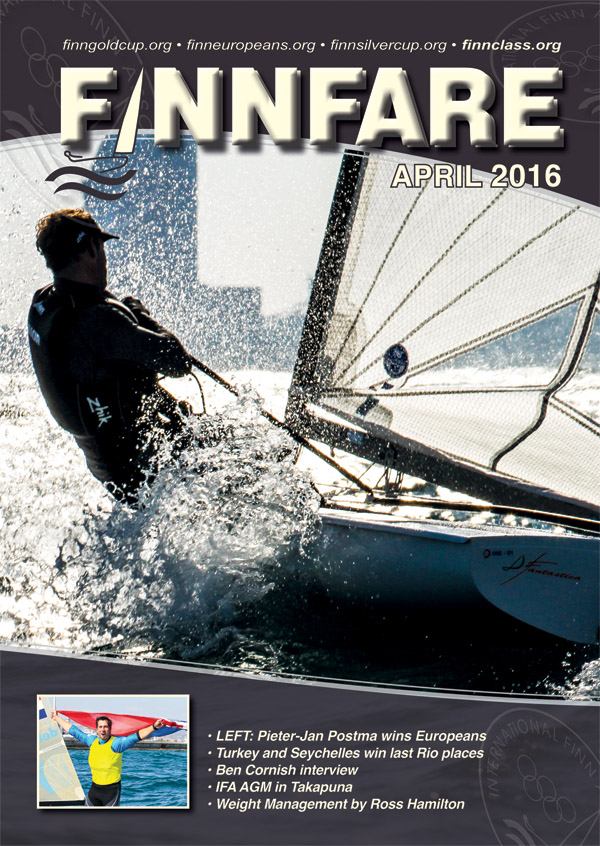 Josh Junior, featured on the cover of the April 2016 edition of FINNFARE, is fast becoming the most successful New Zealand Finn sailor of the last generation and one of the brightest talents in the class at the moment. After a string of top results this season, including his first ever major European regatta win at the Princesa Sofia in Palma he is still hoping for selection to go to his first Olympics in Rio.

One of the other rapidly rising class stars, Ben Cornish, talks about what it is like to train alongside Giles Scott. “I am a believer that working with someone better than you is important to increase the rate of development. Being able to spar against the best in the world gives me a target. I know that if I go out on a given day and can match Giles in tuning then I am doing something right. The training on the water is intense and I have never come in from training thinking that I haven't learnt something new."

“Being able to assist with someone’s preparations for an Olympic Games is teaching me things which I hope I can transfer into my own Olympic success when my time comes.”

He also reflects on his past two years in the class. “The Finn class is filled with so many great people who are all willing to help you and chat about the day’s racing. I was totally blown away with the amount of kind people in the class and I think it fuels itself; it makes you want to help others.”

In his latest article looking at the physiology of sailing, former Finn sailor Ross Hamilton talks about weight management in sailing. “By now most of us realize the importance of bodyweight in sailing. Too light and we get blown out the back of the fleet and too heavy, we drag the boat slowly around the course. In terms of body composition the boat cannot differentiate between fat and muscle mass. In terms of our conditioning though it is important we have an optimal body composition.”

He recommends a consistent and sustainable approach to achieve successful weight changes. “This endeavour should be treated as a marathon and not a sprint. Nutrition is half of the battle and experience has shown me that sailors from different cultures have very different eating habits.”

He also has a warning. “High intensity conditioning is also touted as a rapid way to burn fat. It should be noted that doing this in a carbohydrate depleted state can lead to muscle loss and higher levels of fatigue. More recovery time is required and this may become problematic if skill focused sessions are affected by fatigue. Circuit or interval sessions can be used but athletes should be in a fuelled state and appropriate recovery should be planned.”

With the round of Olympic trials almost over, one sailor who says he definitely won’t be back is Zach Railey. After an absorbing US trials at the Europeans in Barcelona he said, “This is it. No more sailing for me, back to the real world. In terms of an Olympic career this is it. I have hung my boots on top of the mast, so I’m done.”

Though he says his Olympic career is done, he might be back at some point. “I love the Finn. It’s a technical boat, highly physical; it’s a really fun boat to sail. It also fits my body really well. I’m a big guy, I’m 6'4" and my weight can range up and down depending on how much I am training but I am usually 100 kg, and that’s what the boat was made for.”

“It’s been a very successful Olympic boat and it has a lot of great history, a lot of amazing sailors who have come through it, and were very successful in the Finn and other endeavours after that. I’ve enjoyed sailing it and I’m always going to want to sail it. I’m sure I’ll come back and do some Masters Worlds after I have made some money and can spend it on having fun. And you never know, where sailing takes you. It’s a sport you can do for your entre life, so I’ll find some way to stay in the sport somehow.”

Also inside this issue:

Read it online here or download the PDF here.