The recently crowned U23 European champion Nils Theuninck, from Switzerland has taken the lead at the 49 Trofeo S.A.R. Princesa Sofía Iberostar in Palma after two more races were sailed in light and tricky winds on Tuesday. He holds a two-point lead over Olympic champion, Giles Scott, from Britain, and another U23 sailor Luke Muller, from the USA. The race wins went to Fabian Pic, of France and Milan Vujasinovic, of Croatia. 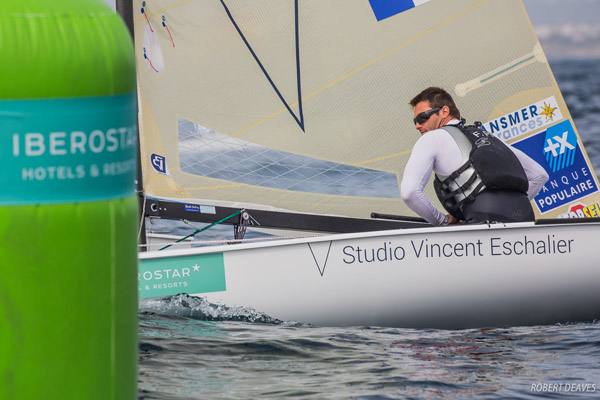 Already rescheduled for a later start at 13.00, the fleet was then delayed on shore for another hour. Many restarts and delays for resetting the line meant that the fleet didn’t get back to shore until well after 18.00, but with two more races on the board.

Race 3 was started in very light winds and Pic dominated, holding a small lead at the first top mark that he extended throughout the race.

He explained, “I was at the boat end and I saw a bit more pressure on the right side of the course and ended up going really right to find fresh air and then rounded the top in first place. On the downwind I was trying to be on a good angle, not really looking behind me, and it was working.”

On the second upwind, he saw the wind was coming from the left so took the right gate and went to left. “That was quite good. The wind was super shifty so I was always not looking at the other people, just only playing the wind, and I think that worked today.”

He won the race with a comfortable lead from Muller and Ondrej Teply, from Czech Republic. 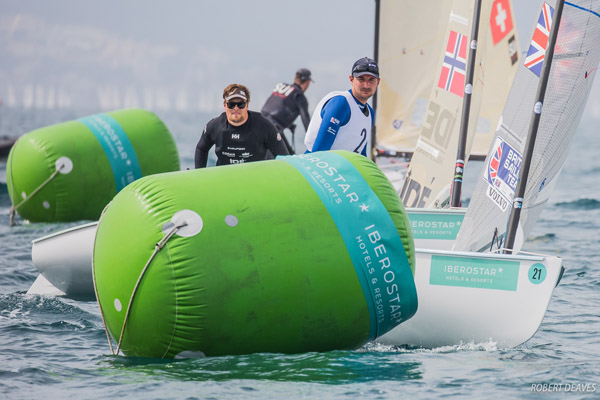 The wind was going left the whole afternoon while the fleet tried to start but after the start of Race 4 it flicked right 20 degrees. Many sailors on the right side overstood the top mark, but Vujasinovic judged it perfectly.

He said, “All day was very shifty and very hard and we were waiting a lot. The line was very biased and the first upwind was very short. The others guys couldn’t make up for the loss at the start, and after that it was just easy to finish off.”

He won the race ahead of Pablo Guitián Sarria, and Joan Cardona, both from Spain. 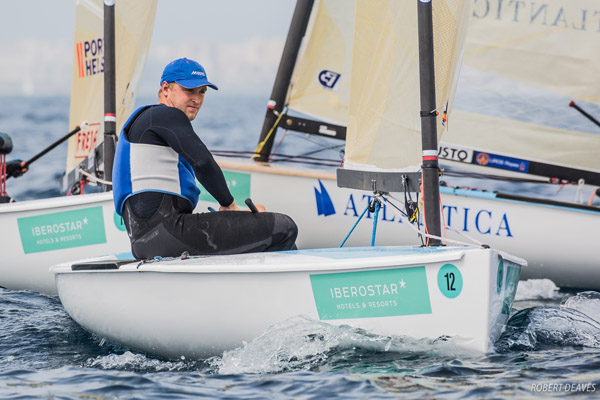 Like a lot of sailors here he has had an inconsistent week so far. “In the first race today I got a yellow flag on that start and finished badly, and yesterday I had one good and one bad race, but many guys are having bad races, but I think it’s been that kind of regatta so far.”

Muller has exceeded his expectation so far in this regatta after placing 29th at the recent European Championship in Cádiz.

“I had one good and one not so good. I got off the line clean on both of them. In the first race I didn’t really make any mistakes and tried to stay lifted in good lanes and had really good speed. I rounded the top in third, and passed one downwind and then followed Fabian the rest of the way round.”

He paid credit to his training partner, Caleb Paine, the bronze medalist in Rio, and their coach Luther Carpenter.

“I am really happy my starting and my speed right now and really all the work with Caleb and Luther getting our speed up with our rigs has really paid off. I am very happy and very grateful and maybe a little surprised.”

On his performance so far this week, “I don’t think I have a best condition, but I have been doing well so far in these conditions. I am definitely always trying to keep the speed up and changing a lot of things all the time and using the tools that Caleb and Luther have given me, and trying to keep my head down."

You only have to look at the results to see how tough the racing is and how deep the fleet is in talent and ambition. Many of the top sailors at the recent European championships are deep in the fleet. European Champion Ed Wright, from Britain, is in 34th, while second placed Nicholas Heiner, from The Netherlands, is 16th and Josh Junior, from New Zealand is in 40th. However, World Champion Max Salminen, from Sweden recovered some ground today with a 7, 10 to move up to ninth overall.

However a 9, 4 was enough for Theuninck to take the lead from Scott, who placed 8, 11. Muller followed up his second place with a 26, which he is discarding.

Pic concluded by saying, “Many guys have had good races and bad races, but tomorrow everything can change. It should be windy, so that could change the ranking a bit. The top guys will be back in front.”

Racing for Finns in Palma is scheduled to continue at 11.00 on Wednesday.

The event website at www.trofeoprincesasofia.org contains live race status and results updates during the day. 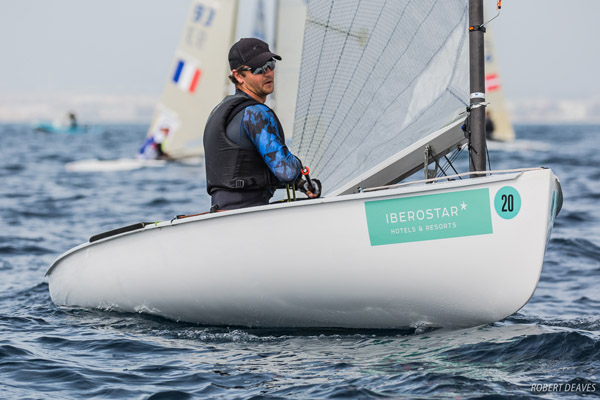