The Hempel Sailing World Championships 2018 in Aarhus, Denmark for the Finn Gold Cup got off to a slow start on Thursday after only one race was possible as the gradient and thermal breezes fought all day long. When the sea breeze finally won late in the afternoon, Jorge Zarif and Josip Olujic took the race wins in their groups after a shifty race in 8-12 knots of wind. 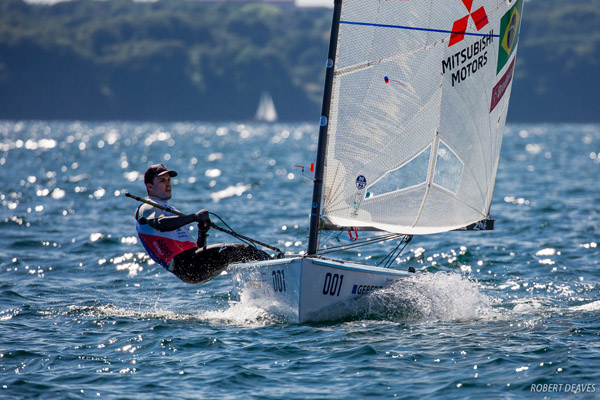 The Finns were unusually split into groups, and even more unusually the groups were sailing separately, meaning that yellow group was scheduled to sail two races and then the blue group. However, on arrival at the course area, there was not enough wind to race. After an hour, race officer Peter Reggio moved the fleet to another area close to the Aarhus shoreline. For a while the wind come off the shore, but then switch to the sea breeze, and back again. One race was even started with an offshore wind but was abandoned after a few minutes as the breeze evaporated in the stiflingly
hot Danish air.

Finally at around 4pm, a sea breeze became established onshore and the racing got underway. Blue group had also been brought out and the fleets sailed one race, with a 10-minute gap between starts.

In Yellow group, while most of the fleet favoured the left, the leaders emerged from the right. After almost being cut in half by a media boat out of the start it was James Dagge from Hong Kong leading at the top from Dave Shilton, from South Africa and Can Adurak, from Turkey. Dagge, in his first full year in Finns, managed to hold onto his lead downwind and up the second beat. However, with Oscar raised at the top of the second upwind could he not hold off Zarif, from Brazil, and Guillaume Boisaard, from France. 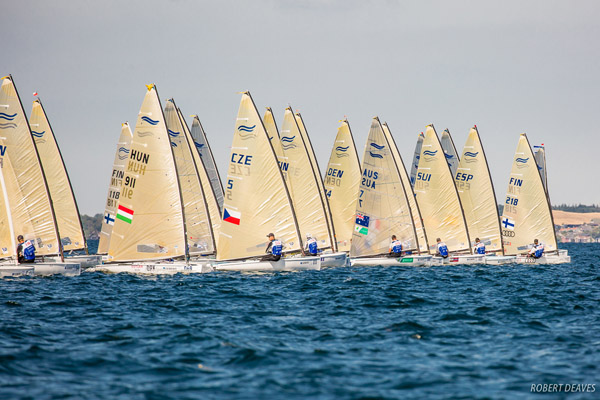 In Blue group, Olujic also went right and led round the top and was never headed. He was followed round by Lukasz Lesinski, from Poland, and Joan Cardona Mendez, from Spain. While Lesinski slipped back Cardona held on for second and the defending world champion Max Salminen, recovered to cross third.

Olujic said, “The race was pretty tricky I was lucky that I could watch the group before us and saw that there were some shifts and some changes to what was my strategy before the start. So I decided to start at the committee boat and tried to keep the right side, which at the end was a good decision I was leading from the top mark and was more or less controlled downwind and on the second upwind and on the last downwind I extended so it was kind of easy when I was in front.”

“It’s really nice to win the first race of the Gold Cup especially as we all know it’s the major event after the Olympics so I am happy with that.”

Defending champion Salminen was pleased to get the first race out of the way without incident. “It’s nice to get going finally. Always a bit nervous before the first race therefore it's even more satisfying to get away with a solid keeper. I finished third in the race after waiting for a long time for the sea breeze, and in the end it was a decent race.”

However the major story of the day was the outstanding performance of the sailors that were part of the Emerging Nations Program. Eight sailors had received assistance and training before the worlds. One of these was James Dagge who led most of his race, but also Dave Shilton and several others put down some markers today. 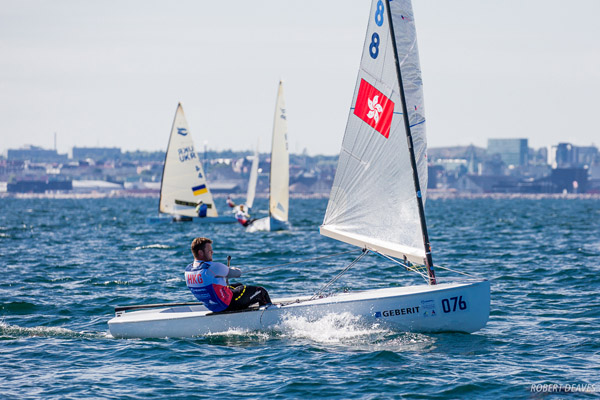 Dagge explained his day, “Excellent first race. It’s a shame we didn’t get two races but the race committee did a really good job to get that one in. We were waiting for five hours.”

“I managed a really good start and first work and was first round the top mark. That felt pretty good…until you see this wall of boats chasing you downwind. That’s a bit daunting.”

“I thought it was a bit optimistic that some of the guys thought the breeze would go left considering how late in the day it was. So we thought it was going to go back to the right, which it did fortunately.”

“The training we have been doing with the ENP and with Mads (Bendix) has been really good. It has helped out a lot. We have trained in that race area quite a few times.”

“I always knew it was going to be extremely hard to keep those guys behind me; when you have a couple of the best guys in the world 20 metres behind you, you have a pretty serious job to keep them there, but when you are out in front you can play your own game and do what you want.”

“The boat was going really well. Unfortunately they got me on the last run, towards the end when I gybed back to the gate mark to late, and finished third, but still pretty happy with that.”

“Tough first day and excited to see what tomorrow brings.”

Racing is scheduled to continue Friday at 12.00 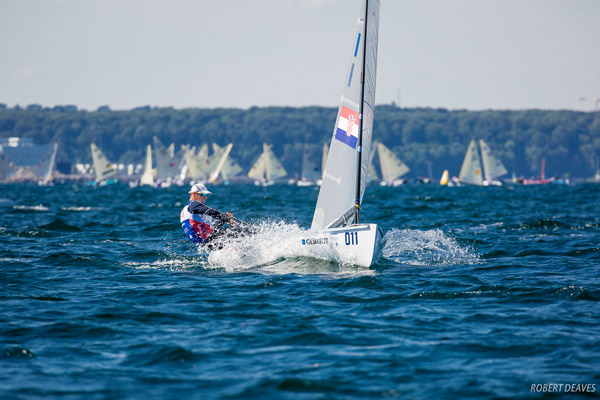