On the second day at the World Cup Series in Hyeres, France there were new conditions and some new faces at the front. Race wins went to Brazil’s Jorge Zarif and Ed Wright from Great Britain, but Ben Cornish continues to lead, on equal points with Nicholas Heiner from the Netherlands. Turkey’s Alican Kaynar has moved up to third.

The wind had swung 180 degrees overnight and brought similar strength winds to Tuesday, but also a lot of grey cloud later in the day and some very light rain.

In Race 3, the fleet largely favoured the right hand side after a pin end favoured start that left Heiner bailing out and France’s Jonathan Lobert struggling to get past the pin end boat. However they both recovered well and at the first mark it was Deniss Karpak from Estonia leading from Zarif and Croatia’s Nenad Bugarin. Zarif took the lead downwind and then extended up the second beat to sail away for the race win. Heiner emerged from the chasing group to round third but on the final downwind, Karpak recovered to third at the finish. Bugarin crossed second. 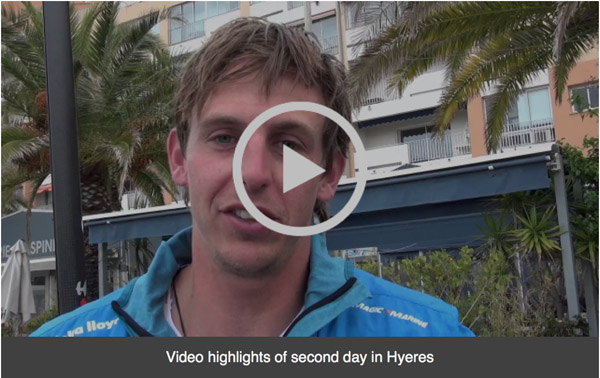 With the right side lifting off the line Race 4 began with a long starboard tack in slightly more wind. Those who could get over to the right did well, while those who persisted with the left faired less well. British youngster Cameron Tweedle rounded first ahead of Lobert, however it was France’s Fabian Pic who took the lead by the gate and led up the second beat. Then things started getting tricky as the wind started to drop and shift. Britain’s Ed Wright rounded ahead of Pic and Heiner. The last downwind went quite light, but Wright and Heiner found the best pressure, while Pic dropped to fifth. Kaynar ended a good day with a third place finish to move up to third overall.

Zarif explained his day. "Just before the start the wind shifted left so the pin end was favoured and my plan was to go to the right. I had a good start about fourth boat from the pin and crossed the fleet to the right and was third or fourth at the top mark. Then it was pump as hard as we could. On the second beat I tried to cover the others and protect the right and was able to extend a bit. It was a good race. Some shifts, some breeze, perfect.”

Since the Olympics. “My first day of sailing was December 26 training before Miami. I am still at university, and I have one more year, so I am part time sailing now, just training a bit before the championships, and then racing. I am not going to the Europeans, but I will race just in Aarhus, in preparation for the Gold Cup in 2018, and then the worlds this year so it’s going to be a short year.”

Heiner said, “Tricky day with everything between 6 and 14 knots. I achieved what I wanted to strategically. In the first race I had a bad start but came back pretty quickly. And from there just built up the race and finish fifth. In the second race I had a really good start, went with the first group to the right, but came back too early on the left. Then I fought my way back in to finish second. It was a brutal last downwind with all the guys but it was good fun.”

Race 4 winner, Wright, explained his race win. On the second race, the first beat, he said, “wasn’t really tricky. We all started on a big header and then you couldn’t really tack because people were pinning you out to the left. The guys who got out to the right got a nice lift and then it knocked and then they came in quite a long way ahead. It was pretty simple if you were able to do what you wanted but the fleet determined what you ended up doing.”

“The last downwind was a bit tricky with the wind was dropping and spinning right so it was hard to know what to do. I managed to stay in the middle of the pack and just cross the line just before them.”

Hoping for some of the stronger winds that were predicted. “Apparently it was meant to be windy all week but it's not materialised yet.”

Having just announced his campaign for Tokyo is starting this week, he was encouraged by his downwind speed. “On the downwind when I made a lot of ground up, I was thinking I have kind of developed a new technique for myself, something that I can put my physical energy into – in the past I have not been able to capture that – so I was very happy to pass quite a few boats there.”

The Finns continue with two more races scheduled for Thursday from 11.00. Racing continues until the medal race on Sunday 30 April.