Nicholas Heiner from the Netherlands has risen to the top of the Finn rankings after the third day at the World Cup Series in Hyeres, France. France’s Fabian Pic also moved up, to second, while Great Britain’s Ben Cornish didn’t have the best day, and dropped to third. Race wins went to Brazil’s Jorge Zarif and Norway’s Anders Pedersen.

The Mediterranean resort remained grey and occasionally inclement as the regatta entered its third day. Predictions of mistrals remained a mystery while the Finn fleet got in two more races in a shifty offshore wind, which rose from 3-4 knots to top out at 14-16 knots.

Pedersen was the star of the day, leading round the first windward mark in both races, and, but for a first race, second beat, error, could have won both races.

Two attempts were made to start Race 5 in a very light wind, but on the third attempt the wind suddenly filled in at 12-14 knots. However the windward marks were not reset, so the first leg was very short, resulting in a very congested top mark and first gate rounding. Pedersen led round from Zarif and Croatia’s Josip Olujic. Pedersen held his lead at the gate but on the second, and much extended, upwind, Zarif emerged ahead to lead down to the finish for his second win of the week. Heiner crossed second after passing Olujic on the final downwind. 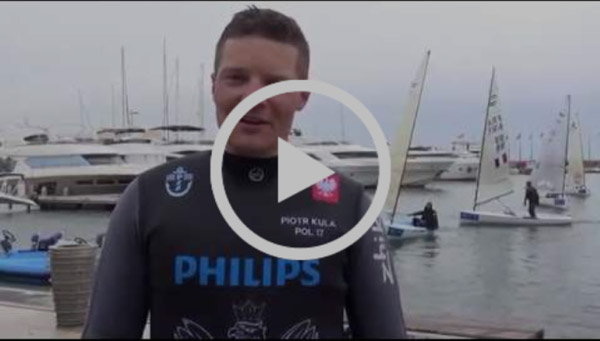 Race 6 was similar with the fleet quickly getting over to the right side of the course. Again it was Pedersen leading round the top, but this time he sailed well and extended for the win. Ed Wright from Great Britain was second throughout much of the race, holding off a strong challenge from Piotr Kula, from Poland, who crossed in third.

Pedersen, the 2014 Junior World Champion, won the day with a 4,1 to move up to seventh overall.

“It was quite shifty, so it paid off to stay in the middle, find the pressure, and go for the high courses and I managed that quite well on all the upwinds so that was good. Downwind was tricky to get the shifts. I am quite happy, but I did one bad upwind and lost three boats but all in all a very good day.”

“Last time I sailed this well was over a year ago in the build up to Rio.”

For the coming year, “I am taking it a bit easy this year, taking some time off, some university, but now I am back in the boat I am aiming for Aarhus next year to try and qualify the country and then hopefully Tokyo in three years.”

Kula ended up with a 7,3, to remain in fifth overall. However it wasn’t all smooth sailing.

“I got caught up in some bad decisions right before the top mark, so I lost like easily 100 metres, but then I continued to get back and managed to get back into the top 10 at the finish. And the second race, starting on the black flag was very, very close, but I got a clear nice start. Everyone who sails here either loves it or hates it and today was very hard. On the second upwind I kept to the left and we got a nice lift and managed to pass a few guys. I was third at the top and third at the finish.”

After the disappointment of not qualifying for the Rio Olympics, Kula weighed his options carefully. But he decided to come back and is full of optimism and joy for his third Olympic campaign.

“This is a combination of a couple of factors. First of all I decided if I stay in the Finn and make another Olympic campaign, one of my goals is to be happy with what I do, enjoy my friends here, the Finn guys and everyone involved in the Finn sailing, and I think this attitude gives me a lot of joy. I recover better, I sail better and if I do badly in a race I don’t lose my mood, I keep on finding solutions, so this is good for the racing.”

“I am really happy about what’s happening this season so far. I got a new boat, which is slightly better than what I was using last year and especially in today’s conditions. I am having a lot of fun with my sailing this year.”

Kaynar ended the day with a pair of sixth places.

“Today we had again two difficult races. We had lots of shifts in the upwinds and free pumping in the downwinds. The first race was quite important for me as I had a bad upwind. I recovered in the second upwind, which I think was the key for me today. I had two good races, so now fourth overall. I am happy so far.”

On his good form so far this year, “We did some good training over the winter and I am ready physically and we practice some races, so everything is going well.”

The Finns continue with two more races scheduled for Friday from 13.30. Racing continues until the medal race on Sunday 30 April.