Andy Maloney secured the 50 Trofeo Princesa Sofia IBEROSTAR on Saturday after an epic medal race in 18-20 knots, just doing enough to finish close enough to race winner Giles Scott to take the title by 2 points. Scott took the silver while Josh Junior crossed in sixth to win the bronze.

Big wind was always on the forecast so it was no surprise when the fleet woke to 25 knots and huge waves rolling down the Bay of Palma, and the decision was taken to postpone and wait it out. But, Finn sailors being Finn sailors, they were full of bravado, and raring to go. 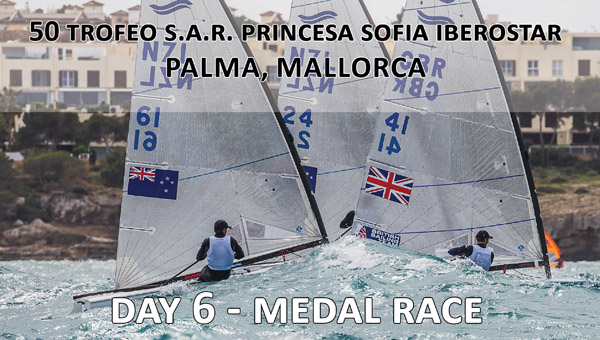 Highlights from the Medal Race 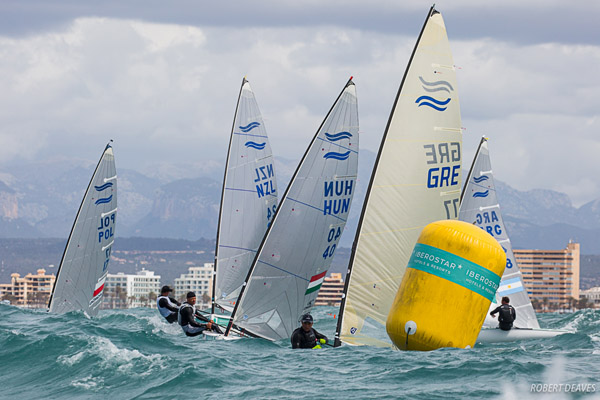 Finally starting shortly after midday the race was sailed in great conditions, with huge waves. Maloney and Scott tussled up the first beat, but Scott got away and rounded ahead to take the lead downwind and storm away to a comfortable win. Maloney was deep in sixth or seventh and it was looking like anther victory for Scott was looming.

On the final upwind, Maloney headed up to the right and after a few good shifts was back in contention and the moved up to third at the final downwind mark. Scott paused at the final mark and considered his options to push Maloney back, but then thought better of it and headed to the finish to settle for silver, while Ed Wright almost caught him at the end. Maloney crossed third to take the gold while Junior finished in sixth to keep the bronze.

Maloney explained his race, “It was really close going into the race today and I just wanted to stick close to him, and see if I could slow him down and put us at the back, and not enable him to get an opportunity to put that many boats between us. I started just up on his hip and managed to hold him out to the port layline. And when he came at me I tried dialing down and got a penalty on him but unfortunately that got green flagged. We were coming in on the port layline and I was trying to slow him down a bit, but I made a bit of a meal of that and he managed to roll me and got himself back into the race. On top of that the wind went left on the beat, so we were still in the race after going quite slowly up the left side.”

“Then it was all on from there and I was mid-pack and had to fight me way back to within a couple of places of him to secure the gold. I was about six or seventh at the gate, but sailed a few nice shifts up the second beat, so it was a pretty full on race with lots going on.”

On winning his first Finn regatta, “It’s awesome. It’s been a really good week. Really consistent from Josh and myself, and to both be up there at the beginning of the season is really cool. We are looking forward to the rest of the season. For now we go home for a few weeks and then come back for the Europeans.”

On the level of the fleet. “The level is really, really high now. Everyone is sailing the boats really well and to get a gain in any sort of wind range is quite hard to come by so it’s really tough racing.” 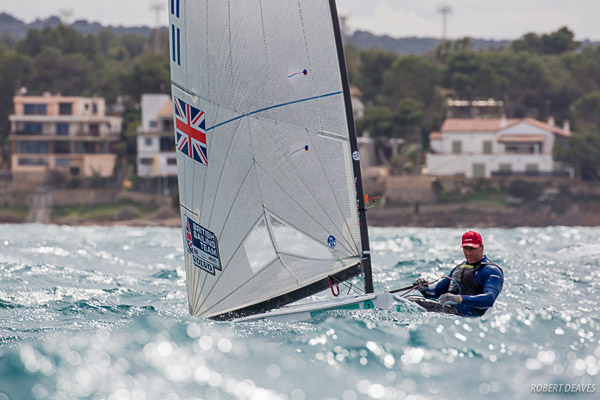 Scott contemplated his missed chances. “I was reasonably pleased the way I dealt with Andy on the start line. I led out towards the left hand side and actually managed to spit him out behind me, but because of the way the waves were I couldn’t make a big enough jump on him to tack and clear. So we ended up having a bit of a come together on the port layline, which ended up with a green flag and we came in on a lefty to the windward mark and he ended up slowing up to, I think, get into a luffing position on me.”

“But I managed to roll over the top of him at the windward mark. So I sneaked round there and got away and won the race. The tricky part was working out whether to go on the offensive on that last downwind, with him in third, fourth or fifth. I needed two boats between us, but as it was he came through at the bottom gate to finish third. So close, but not quite.”

On his performance this week. “It was really quite close and I’m pleased with the way I managed to claw back the points that Andy got on the fleet in the early part of the week. We were quite a long way behind, so that’s really positive. I think the errors I made are, I hope, pretty easy to correct. But I think things are reasonably positive. Silver here is just fine. But there’s always work to do, win or lose.” 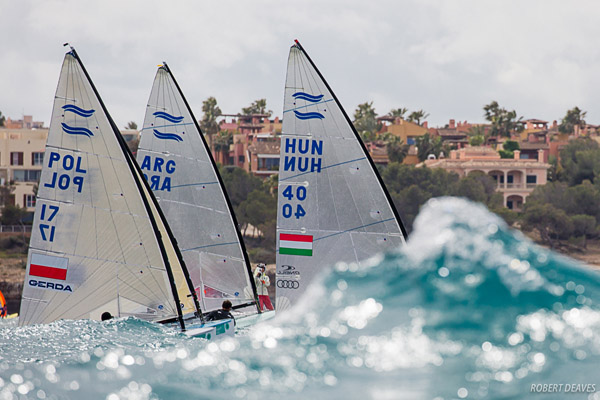 Bronze medalist, Junior had this to say, “Andy and I turned up and were looking to check in with the fleet, and it’s been a great week for both of us. I’m super stoked for Andy to take the win. It’s pretty epic. It’s his first win in the Finn class and for me to be on the podium as well, I’m pretty stoked. So it’s great for us, and great to see we are on the pace and from here we just keep moving forwards towards the Europeans and the world championship later in the year.”

On his own results, “I didn’t really have a bad result, but I just hovered in the middle and failed to convert to some really good ones. I was there or thereabouts and didn’t sail through the fleet enough as much as I would have liked. It’s nothing too major and those will come right and on my day I could have easily won as well. It’s just about keep chipping away and keep trying to improve. We’ve made some good steps from last year and we’ll make a few more and hopefully continue moving up.”

On whether the partnership will survive the trials as they approach selection for Tokyo. “We are always friends, always looking to get better and faster. We’ll always be looking to improve each other and we’ll always be happy that each other has done well, because at the end of the day the goal is to win the gold medal for New Zealand and we don’t believe that will happen if we are fighting against each other. We just keep trying to improve each other and keep moving forward. And that’s what we are doing. Andy won this week and next week it could be my turn and there’s not much between us. We just have to continue to race well.”

The Trofeo Princesa Sofia marks the beginning of a long hard season for the Finn class. Most of the fleet will now head direct from Palma to Athens, where in just five weeks time, the European Championship begins, with the next four nation places on the starting line in Tokyo up for grabs. After that, many will go to Tokyo for training, while there are also Continental qualifiers in Tokyo and Rio. Finally at the end of the year, the Finn Gold Cup returns to Melbourne.