Ready Steady Tokyo, the Olympic Test Event concluded Thursday after the medal race was abandoned because of insufficient wind. Zsombor Berecz, from Hungary, had already secured the gold a day early, while Nicholas Heiner, from The Netherlands, took the silver and Giles Scott, from Britain, took the bronze. 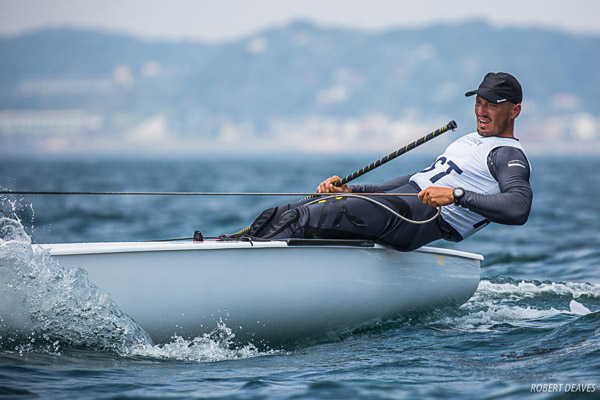 Though the forecast was 8-9 knots, it was a largely grey day with the wind failing to materialize and the lack of sufficient wind led to postponements through the afternoon. With the Finn class as the last start before the 17.00 cut off, by 15.30 it was clear that no racing was going to be possible and the Finn class was abandoned.

Gold medalist Zsombor Berecz has been the star performer all week. He has made a serious threat to Scott’s dominance over the last eight years. No one has taken a major championship off Scott, the current Olympic champion, since 2010, so Berecz’s win here is significant, coming on the back of last’s year’s world title, where Scott was not present.

He said, “I can get used to this feeling long term. We are putting everything down on paper, how it happened and what kind of things lead to us being on top, so we can we try to do it again next year.”

“Every day was good, but I was a bit worried after the third day. After six races that’s usually when I start to over think, and you get emotionally attached, but I managed to get over that and just focus on the next race and I managed it well. My performance was the same after that so I am very happy with that.” 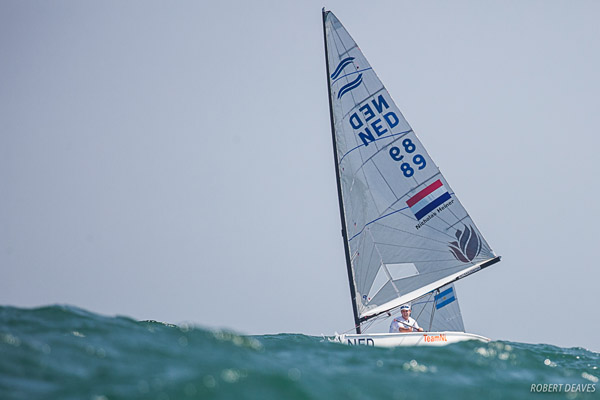 Heiner has had another great season by most standards, but a major win continues to elude him. He won gold at the World Cup here last year in a smaller fleet, but the test event was a major goal and a medal here is another big step towards Tokyo 2020.

“It took a long time to decide whether I was happy with the week. Everything after the top mark was great with some really nice comeback races. But we somehow always struggled off the line from 100 metres to the top mark, and for sure that’s something we need to work on looking back at starting positions.

“So summing up, it was a week of comeback races.”

“We came here early for this event with the goal to win, but Zsombor did an amazing job. If I had started sailing well a bit earlier in the races, it would have meant two or three points every race, and it is safe to say in the first beat I lost a lot of points, though Zsombor couldn’t put a foot wrong, but it would at least be nice to be in a position to challenge him for the gold. And Giles, in third, I guess he needs to do some more work as well.” 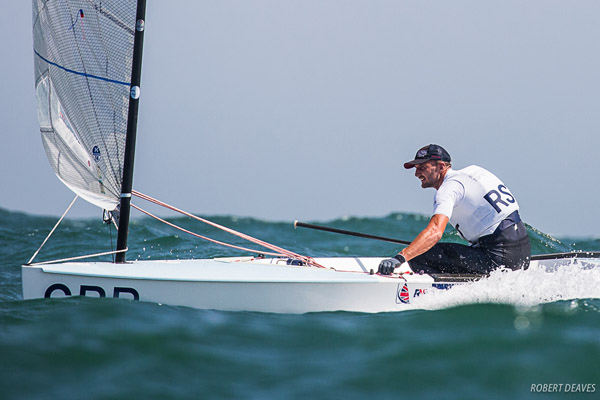 A bronze medal is something that Scott doesn’t see very often. Too many mistakes in the tricky conditions gave away points he couldn’t afford, though when in front he was looking strong.

“I think we’ve had quite a good week of racing, apart from today obviously. The big thing for me was the latter part of the week when I let things slip a bit, which was a bit annoying, but Zsombor sailor very well this week so kudos to him.”

“Yesterday was a tricky day for me as I ended up being in that second place no-man’s land with being the only boat in the fleet that had a very outside shot at Zsombor, which made things pretty tricky. I took a risk, but there were a few other issues. Somehow I ended up getting tied up with the American in the pre-start, which put me on the back foot, which then opened the door for Zsombor to have a very easy time, covering me and I got spat out the back. So that was kind of it. A frustrating way to end the regatta but a lot of lessons that I will take through to next year, which is where it really matters.”

The only other sailor capable of winning a medal today was Andy Maloney, from New Zealand. He has had an amazing season, winning in Palma and Marseille, runner up at the Europeans and now fourth in the Olympic Test Event. Together with his training partner, Josh Junior, they have both raised their game over the past year to challenge the front at every regatta they have attended. But he never got that chance to challenge for a medal today.

Of the other sailors in Enoshima, for some it was a first visit, while some have trained here on and off for several years. Either way, a lot has been learned about the conditions, the current, the wind patterns and living and competing in the extreme heat. Of the 10 races sailed there have been eight race winners, a clue to the complexity and challenge of the sailing conditions in Enoshima. Over half the sailors had results ranging from top five to bottom five. Few found anything resembling consistency.

However the sailor’s time in Enoshima is not over yet. More sailors are arriving to take part in next week’s World Cup Series opener, which is also the Asian continental qualifier. Competitors from China, Hong Kong and Iran are going head to head for one final battle to earn a place at next year’s Olympic Games. Racing starts Tuesday 27 August.

It has been a long week in Enoshima at the Ready Steady Tokyo Olympic Test Event. Japan has been a great host, and the sailors have had the full range of conditions from the tail end of a typhoon to extreme heat to light winds, onshore, offshore, shifty, stable. The sailors have been challenged to the max and it is a great indicator of what can be expected in one year’s time when the Olympics happens for real.

Ready Steady Tokyo, the Olympic test event is a series of 10 opening series races from Saturday 17, August to Wednesday 21, August. The top 10 will then sail the medal race on Thursday 22 August.

Many more photos can be found here: www.flickr.com/photos/finnclassphotos