Junior keeps lead at Finn Gold Cup, while Scott and Berecz move up

New Zealand’s Josh Junior has maintained his lead at the Finn Gold Cup in Melbourne, Australia after three races on Thursday in a moderate sea breeze. He will take a 13-point lead in to the final day of the opening series on Friday. Olympic champion, Giles Scott, from Britain, is up to second while defending world champion, Zsombor Berecz, from Hungary is up to third. Race wins went to Ed Wright, from Britain, Berecz and Scott. 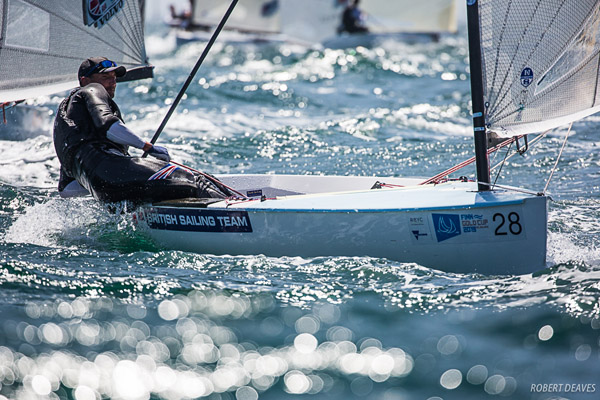 After no racing on Day 3, three races (Races 5-7) were scheduled on Thursday. Following a cool change overnight, temperatures had dropped down from 40C to 22C and with winds picking up considerably from Wednesday’s dead calm to a reasonably stable breeze of 13-17 knots. All three scheduled races were completed with plenty of opportunity for sailors to move up the leader board or to consolidate positions. 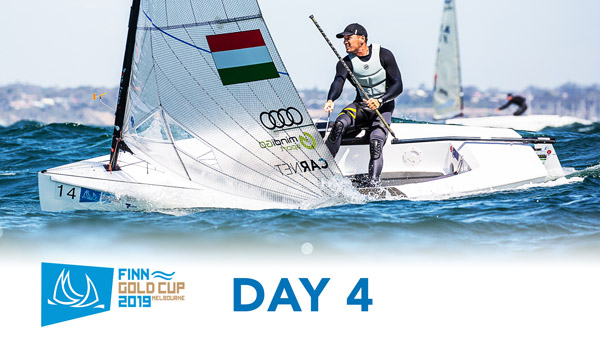 In the first race of the day, Wright led all the way for a comfortable win. Jonathan Lobert, from France rounded second with Junior not far behind. Junior proved faster than Lobert on the downwinds to take second place, with Lobert crossing in third. Scott was originally scored BFD, but that was later overturned after it was established he was misidentified.

Race 6 got underway first time with an individual recall for Turkey’s Alican Kaynar who led throughout the whole race but was scored OCS at the finish line. As a consequence, Berecz took the win after moving into second place before the second top mark rounding. Junior again moved up into the top three on the last downwind to finish third ahead of Jonathan Lobert, from France. Scott followed in fifth. After coming ashore Kaynar was given redress for the late display of the X flag at the start.

In the final race of the day Scott made his move and took the lead at the second top mark rounding to take his first race win of the regatta and move up to second overall. Andy Maloney, from New Zealand, rounded the top in fifth and moved up to second by the finish, just ahead of Berecz, who had rounded the top mark in the lead.

Berecz moves up to third overall after the best score of the day.

“Finally the day that we were all waiting for arrived. This is why we love this boat, and finally today they let us work a bit.”

“It was perfect conditions, 15 knots of sea breeze and three races. I made the most out of it but it was not easy. There were a lot of gusts I missed, especially downwind, and you really had to keep your eyes open all around the course and I made only a few mistakes.”

“I think tomorrow will be the most crucial day. We will have the breeze from the land and it’s going to be very shifty. I think most of the guys will have a big discard tomorrow.”

Race 5 winner, Wright said, “About 10 minutes before the start the wind came in at about 15 knots so it was a scramble to change settings and change sails, but we got away on time and I managed to win the first race. I was able to come off the line, hold my lane and extend from there. It was a pretty nice feeling.”

“The second race wasn’t so easy and in the last race I was coming into the top mark in fifth and the mainsheet jumped out of the block and I capsized. I still managed to pull through, so not a bad day after all that.”

“It was a difficult day with three long races and quite physical, with free pumping all day and a lot of hiking.” 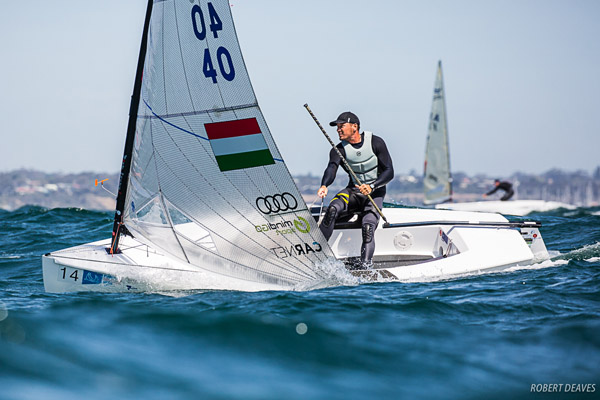 Lobert sits in 12th place, 12 points outside the medal race.

“Today was a proper Finn sailing day with nice breeze and waves. I was ready and looking forward to it, because I have been working a lot this winter for these kind of days, big races and very physical. I am very happy because in the first two races I managed to get a good start and get out of the line quite easy, and then I was alone so I could speed up and sail my lines and two times I was second to the top. But Josh was just too strong. Every time he was passing me on the downwinds and he had a little bit extra speed.”

‘In the beginning of the week I was struggling on the water. I was not on the good sits, but I was confident I could come back slowly during the week and tomorrow would be another day, so race by race so I hope I can make the medal race.”

Junior has hardly out a foot wrong all week, discarding a fifth after seven races, along with some impressive comebacks after low top mark roundings.

“We went out there and ended up with some glamour conditions, and some pretty cool waves and just got into it. It was shifting around a little bit and I found myself on the right side and managed a couple of good races, so I was pretty happy with the day.”

"Andy and I have been working hard over the last year or two in the Finn and have definitely made a step up and have been going really quick. It's just about trying to get good starts and trying to put the boat in the right place and I think a couple of times I have been a bit lucky and managed to come back, but it goes in roundabouts and maybe tomorrow will be different."

Tomorrow will be an interesting day with a strong wind warning from the north and temperatures in the mid 40s. Three more races are scheduled to conclude the opening series before Saturday’s final race and medal race. 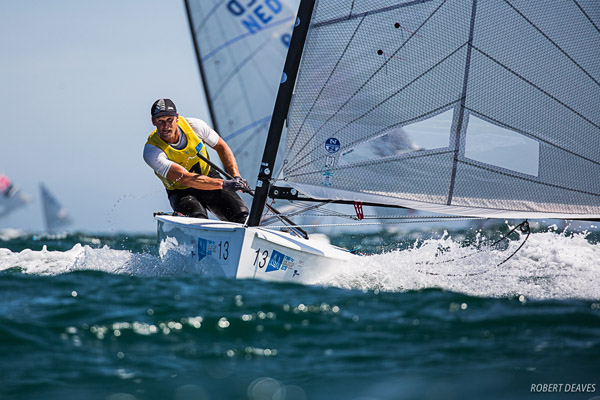