Josh Junior has become the first Kiwi to ever win the Finn Gold Cup after an epic medal race in Melbourne, Australia. Nick Heiner, from The Netherlands, took silver while 2018 world champion, Zsombor Berecz took bronze. 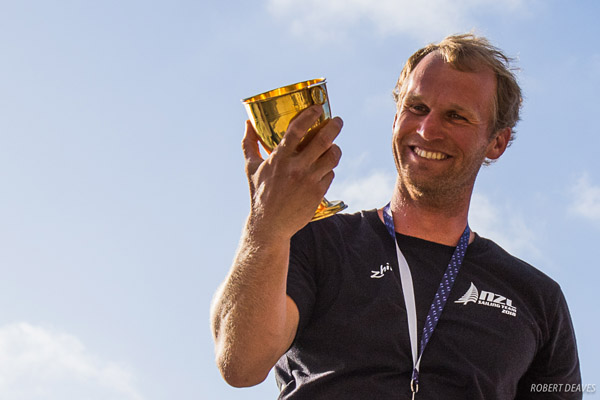 Earlier in the day, Ed Wright, from Britain, won the final race for the rest of the fleet, from Oskari Muhonen, from Finland and Jonathan Lobert, from France.

Even though he went into the medal race with a 16-point advantage over Heiner, Junior kept everyone guessing until the later stages of the race. He made hard work of the start, engaging with Heiner with a minute to go, but then allowing him to escape and control the start to lead up the first beat. 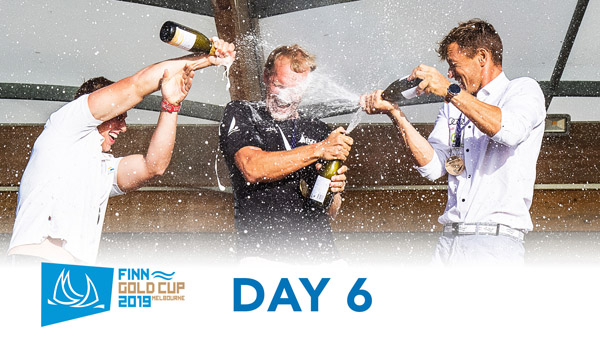 Starting in 20-22 knots, the wind gradually increased, as did the sea state, producing some epic racing conditions and supreme boat control. Heiner made the best of the first beat to round with a nice lead with Junior about sixth. Nothing much changed downwind, but a big shift to the left on the second upwind left Australia’s Jake Lilley in the lead followed by Berecz and Heiner. Junior was still back in seventh after losing out on the right.

While Lilley got away to win the race and move up to fifth overall, Berecz and Heiner battled downwind for silver and bronze. Berecz picked up a monster wave just short of the line and surged ahead, but Lilley was too far ahead to catch.

A mistake by Junior at this stage would have cost him the title, but he maintained control down on the final hairy downwind, to cross the line to whoops of joy. He had rewritten the history books, and despite a long line of celebrated Kiwi Finn sailors, he had become the first one ever to win the Finn Gold Cup. 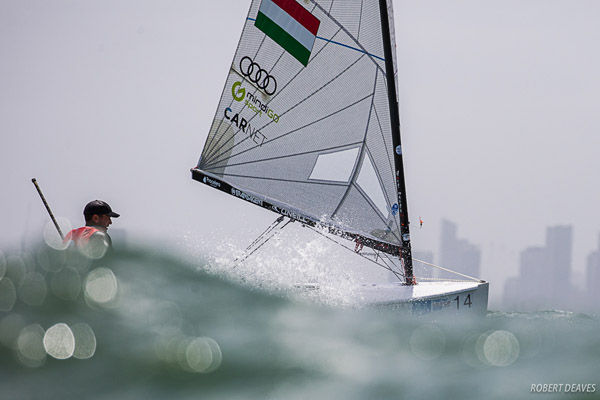 Apart from Friday’s tricky races Junior was never out of the top five, leading from Day 2 all the way to the nail-biting finale. He entered the class in 2013 and has threatened brilliance ever since. But the years of hard work with Andy Maloney and coach Andrew Murdoch has finally paid off. It is an understatement to say he was pretty pleased with himself.

"I had a big lead but, to be fair, Heiner did a really good job at the start and on the first beat and he sort of got away on me. I was a bit worried I was in trouble of losing the whole regatta but I managed to hold it together and get the result I needed and I'm absolutely over the moon.”

"I have never won a world championships or even a medal so I'm stoked. There have been a lot of successful sailors in the Finn for New Zealand in the past and to be one of those is a great honour."

"It's been an outstanding week. I seem to have put pretty consistent results together and that's seen me near the front and took a bit of pressure off. But it's certainly a bit nerve racking. I have never been leading a world championship before, especially for so many days.” 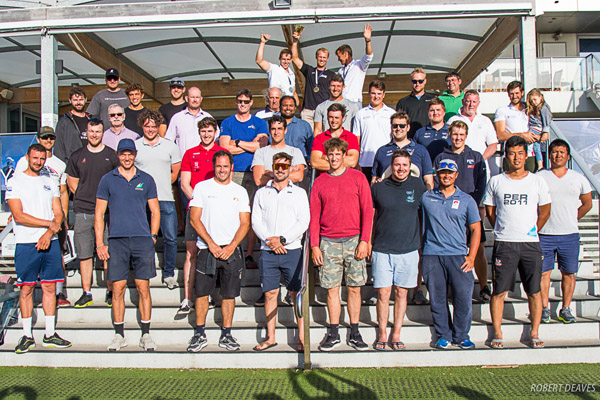 "Obviously Andy and I are really good mates and really good training partners and I was a bit gutted to see him not get on the podium today. But I think he still ended up with a good result. We will have another few regattas and, whoever ends up doing the best out of us will go to the Games and hopefully win a gold medal there.”

Another sailor hoping for a possible Tokyo selection now is Lilley, who has clearly had an amazing week with the medal race win and fifth overall.

“This week I tried to start slowly and consistently to not put any big points on the board and slowly built throughout the week and climb. I sort of clicked it up one gear each day as the regatta went and climaxed with the medal race win. I’m very happy with that and it’s a solid result in the lead up to Tokyo 2020.”

“It was important to go out and have a strong race today and set a mark so that everyone understands that we are coming for Tokyo 2020. I’ve had wins before or another good event, but I think this right now is the highest quality Finn fleet we have ever seen and it’s really tight at the top so anytime you finish top five or top ten is a great result.”

“To have the best fleet ever on Australian waters was really something special and Melbourne highlighted the fact that you have to be good in every aspect of this sport and the weather proved that here and I think the best guy came out on top. It was a fantastic event put on by Royal Brighton Yacht Club.” 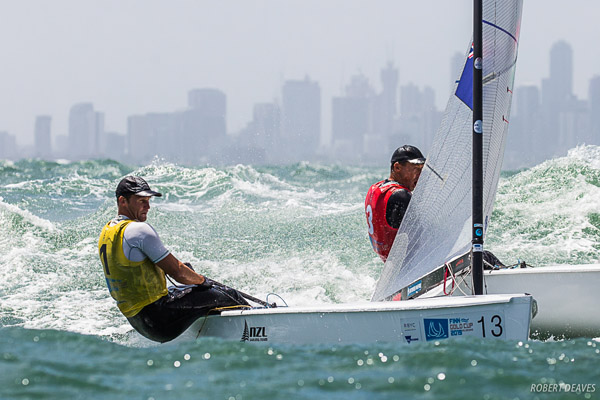 Heiner was happy to consolidate his second place and secure the silver.

“It was an awesome medal race today. Breeze and nice waves and especially with the points from second to fifth, it was all to play for and with JJ well ahead, it was a bit of a hard one. He’s a match racer so I knew what was coming and I think I did a really good job of beating him off the line and had a good first beat and good first downwind and tacked on a nice lefty. The wind kept going left and made it a bit more exciting but luckily I still had Giles behind me and managed to chip away a little bit, and finished second overall, which I think is the best I could do today.”

“I’m pretty happy with the week. Looking back at the medal race at the Europeans in Cadiz where I lost the week on the medal race, we have come a long way since then and the training in Holland has paid off, and I felt pretty comfortable day today and I think that showed especially in upwind speed and sailing away on the downwind. So I think I definitely stepped up my game in the big breeze, so happy where we are going.”

Third placed Berecz was ecstatic with his bronze medal, despite losing the title he won in Aarhus last year.

“I think today everyone enjoyed the sailing. We loved it. I thought I would have the toughest job in the fleet, but I was pretty fast upwind and I didn’t make any mistakes, and it was not easy, but it was easier than I expected. There was a lot to gain or lose but I decided to save the bronze so I didn’t push too hard and risk a capsize and lose it all.”

“Before I came here my goal was to get a medal and I managed it so I am pretty happy. On the other had it was a magical week for Josh. He didn’t make mistakes, so there was noting we could do to beat him. I am happy that he managed to win the Gold Cup. Next time he meets Russell Coutts he has say’ I have something you don’t have.’ So I am really happy for Josh and thrilled to get third after a bad start to the week.” 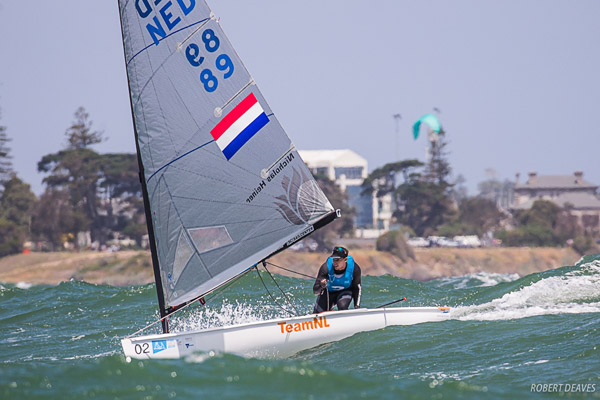 While most of the places for Tokyo have been decided, one of the remaining places will generate a lot of interest. Many sailors are vying to win the remaining European place at the Genoa World Cup in April next year, where the the competition will be really tough. Several sailors have excelled this week including Croatia’s Nenad Bugarin, who has clearly benefitted from training with Berecz, and with coaching from three-time Olympian Pieter-Jan Postma. Bugarin finished in seventh.

Two places further back was Joan Cardona, from Spain, who also took the U23 prize ahead of Nils Theuninck, from Switzerland, and Luke Muller, from the USA.

“It’s been a great week for me. I had some ups and down at the beginning but I managed to finish top 10 and first U23 so I am really happy with my result and it just motivates me more to train as hard as I can to achieve the Olympic spot for Spain in Genoa next year.”

The 2019 Finn Gold Cup is in the books, and it will go down as one of the most competitive world championships for a while, with the first ever Kiwi winner. It also sets the scene for the coming eight months with everyone trying to find form or consolidate their performance ahead of the Olympics. After finishing in fourth, Olympic champion Giles Scott, from Britain said, “This week will serve as a bit of a wake-up call.” After some of the performances this week, that thought will be shared by many of those heading to Tokyo. 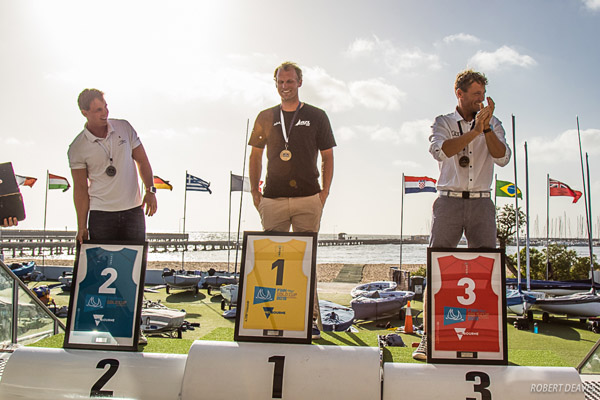