The first edition of FINNFARE in 2019 has been published with the amazing photo of Giles Scott bursting through a wave on the final reach during the medal race in Palma, brilliantly caught by Junichi Hirai of Bulkhead Magazine. 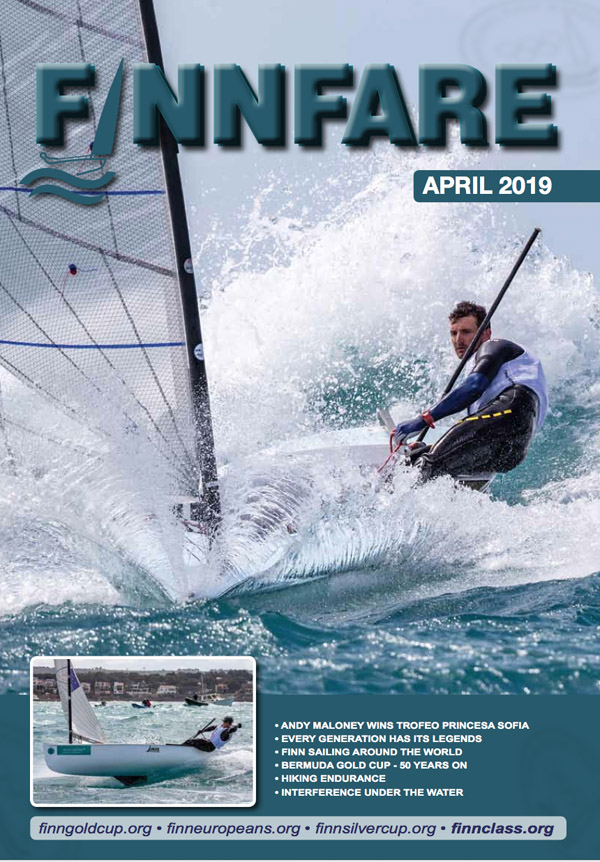 The amazing conditions in Palma are featured throughout this edition, a fantastic spectacle of Finn sailing.

This issue includes an interesting analysis of hiking styles and how to train to improve hiking endurance, by Ross Hamilton of Hamilton Sport.

He writes: “For years the science of hiking has been investigated and studied and for years sailors have tried to find a way to hike harder and for longer. Hiking as a physical movement is different to movements in many sports yet quite similar to others. We think of hiking as a relative to cycling and this is both true and false. In reality it is closer to skiing, mountain biking and even equestrian.”

“What makes hiking unique is the action of the muscle. Normally we expect a contraction and a relaxation phase to most movements. With hiking these don’t occur so smoothly. Many describe hiking as being isometric but this also is inaccurate as joint angles and loads are not consistent. In reality hiking is somewhere in between. There are moments of contraction and relaxation although they occur at much slower rates than running or cycling for example. This means there’s only partial relaxation and the muscles may be somewhat loaded through all phases. For that reason quasi-isometric has become the popular term amongst the scientists.”

Mikko Brummer, of WB-Sails, has been investigating interference under the water. In the first of two articles, he analyses the effect of water passing over the Finn hull and foils, from the point of view of the boat traveling through the water rather than water flowing past a stationary hull

He writes, “To understand better what happens under the water when a boat is sailing along, we need to get acquainted with what in physics is called a frame of reference. If you can still recall your school geometry classes, think of the frame of reference as the coordinate system you are measuring in. We are used to looking at the water rush by the boat when sitting in it, moving with the boat relative to the water.”

"This gives us a ‘false’ impression of the boat slicing neatly through the sea surface, pushing the water slightly aside, and then closing up behind it. In the reference frame of the boat and the sailor, this is true, and actually, the impression is not false at all. But in the reference frame of the sea (or the earth), we know the water is not moving that much at all, and certainly not rushing backward at 5 knots speed along the hull or the centerboard and the rudder.’"

“Our simulation shows what really happens in the earth reference frame, the one of an observer standing on the pier, or a fish swimming under our boat passing by. In reality, the boat is pushing water in front of it, in the front part forward and to the sides, while towards the stern it’s dragging water along, so much so that if your Finn is moving at 5 knots, the water behind its stern is following at 2 knots speed or more. So when you are sailing close to the boat in front of you, you are enjoying a current of 2 knots with you.”

This issue also summarizes all the events since last November. In his President’s Letter, Balazs Hajdu writes: "As already stated on many different occasions the male population worldwide is developing towards taller and stronger people at a much younger age than in the past. At the same time the Olympic sailing regatta has seen a constant decrease of classes and quota for men over 85 kg.”

“With the removal of the Soling and the Star over the last 16 years from the Olympics, for 2020 we are down to only the Finn. Based on a recent calculation, as a result the Olympic sailing quota for men over 85 kg went from over 100 athletes in 2000 to only 19 for 2020 (less than 6% of the total number of sailors in the Olympics)."

“We strongly hope that wise decisions – especially by the IOC – on the future of Olympic sailing will allow the Finn to continue its Olympic presence and unmatched history.”